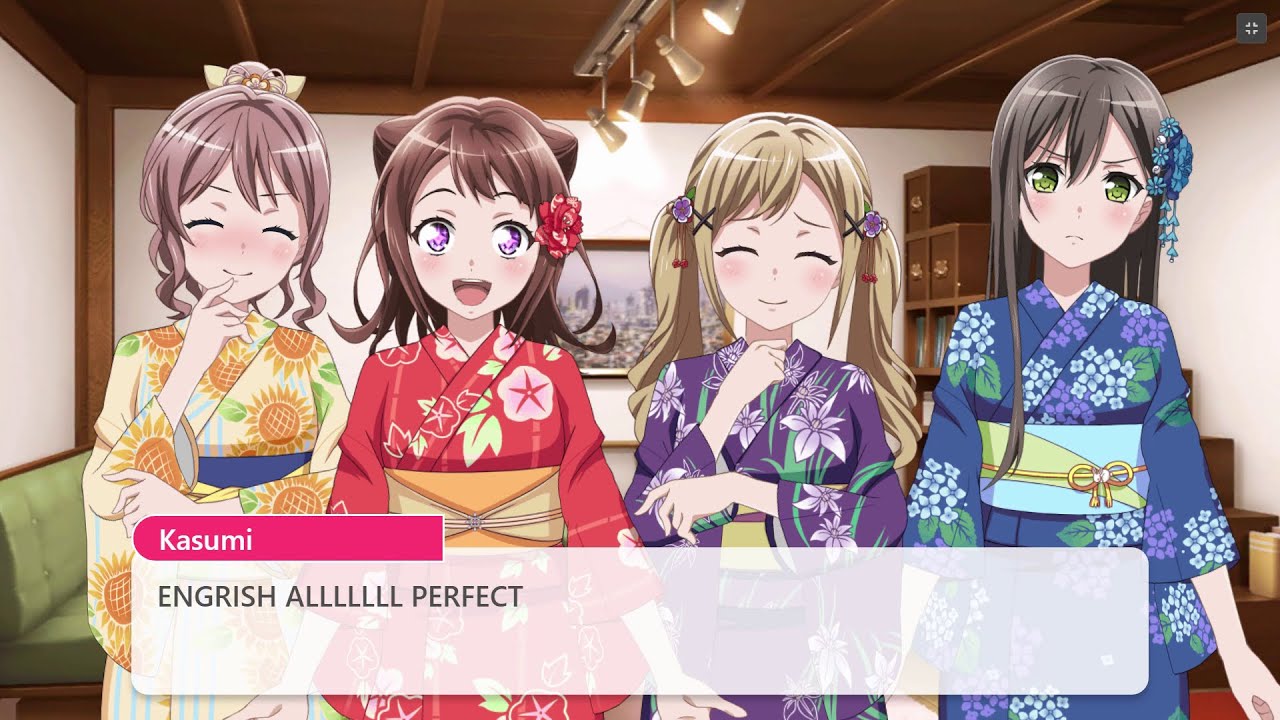 Aimi and Kudoharu confirm their love over CoCo Curry™

Teaching Amane the language of God.

「Arisa no Kura」 or 「Arisa’s Warehouse/Basement」 is a recurring segment on Poppin’Radio where listeners can suggest ‘what if’ scenarios for Popipa to act out unrehearsed. In this last Popiraji episode of 2019, their scenario was: “What if everyone except Arisa can only speak English?”

It’s a pity Rimi wasn’t here. But they all got together on New Year’s Eve and that’s what matters!

My Experience of Bestdori’s Community Stories (for interested subbers)

I’d known this amazing feature since a while ago (https://bestdori.com/community/stories). You’re probably aware I’m always finding ways to do things differently, and I absolutely LOVE watching the characters move and make expressions with every line. So I thought I’d try subbing a radio clip using this. I learned the basics using this tutorial by Burrito (https://bestdori.com/community/posts/1786/Burrito-A-Tutorial-on-Community-Stories).

The initial idea I had was to use Aegisub software to translate and time, go to the story maker to key in my translations, then use the timings to manually adjust the delays on each line according to an uploaded BGM, which would be the radio clip. Finally I would use a screen recorder to capture the result when I let it autoplay.

Although it would be extremely time-consuming, I believed it was feasible. I soon faced several difficulties. It is not possible to insert new lines in between lines that you’ve already made (have to redo everything since that point if you discover an error). Timing is especially troublesome because the ‘delay’ parameter starts only after all the movements are done and the text are finished displaying, thus messing up my Aegisub timings. And also that there are no fast-forward/rewind controls for the preview (need to keep clicking through just to see if you did one timing right, and you pray you don’t miss it). This custom story feature on Bestdori wasn’t meant to be used for subbing but I still thought I could somehow make it work.

Ultimately I had to give up on the idea, because I realized one thing that made it impossible. Since the text is displayed letter by letter (no option to turn this off), sometimes the next line would be spoken before the current line is finished displaying. This was a dealbreaker and I didn’t see a good way of overcoming this so I threw in the towel (I was actually relieved haha).

I still wanted my subbed video to keep those expressions though. So I animated the 100-odd lines and screenshotted all of them, toss them into a video editor (I used DaVinci Resolve), timed them again, and suffered two computer crashes, before I got the result I was satisfied with.

Here is the story if you want to watch it with the animations but without sound: https://bestdori.com/community/stories/5493/Forreva-Popipa-s-ENGRISH-ALLLLLLL-PERFECT
You will have to mute the BGM because I didn’t time the lines to it.

So yeah, don’t expect to see something like that from me again. Burrito has brought up the possibility of more additions to this feature in the future, so I’ll probably hold off using it for subbing until then. For purposes other than subbing though, I have to say it’s really good! I’ve read quite a few impressive stories on there, and araii has been posting story translations for Garupa JP events as well. Totally worth checking out if you’re a fanfic writer, or really any Bandori fan!