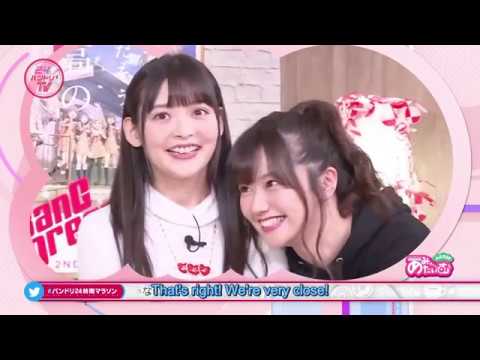 [Eng Sub] Deciding the future of the show with the Toyama Sisters.

Goldfish fishing with the Toyama Sisters!

Aimi and Ozapure solving some riddles

Amita teaches you how to clean up your life

Aimi and Saechi relive their youth and take Instagram photos

[ENGSUB] How to knock down Aiai with your voice ft KDHR

How to play GARUPA without a smartphone

Moeshi wants her socks back on

Alternate title: Sumipe and Sacchan having a Lovers’ Quarrel™ on TV while Amita is just being Amita.

Note about Uesaka’s pen name: リバース (riba-su) can mean both to reverse and, as a slang, to vomit. This pen name references a Japanese variety show aired on 2001 called “水曜日どうでしょう” (How do you like Wednesdays?), in which they had a corner where a comedian named Yasuda took part in a speed milk drinking competition, and after chugging down 5 bottles of milk, he ended up vomiting. This spawned the meme “安田リバース” (Yasuda vomiting), so Uesaka’s pen name means something like “Eve-chan’s huge vomit”. Why she chose this pen name is beyond me, she’s weird like that (lol).